The Red Devils – is the English version of the book titled “Él magyar, áll Buda még!” on Austro-Hungarian cap badges. The volume is a sequence to “Csak előre, édes fiam…” The book’s subtitle is Badges of the Cavalry Divisions and Brigades, Hussar and Uhlan Regiments and Assault Half-Regiments Recruited from the Territory of the Kingdom of Hungary in the Great War.

In short:
The Red Devils – is the English version of the book titled “Él magyar, áll Buda még!” on Austro-Hungarian cap badges. The volume is a sequence to “Csak előre, édes fiam…” The book’s subtitle is Badges of the Cavalry Divisions and Brigades, Hussar and Uhlan Regiments and Assault Half-Regiments Recruited from the Territory of the Kingdom of Hungary in the Great War.

Content:
Following an introduction to Austro-Hungarian cap badges, the book provides an insight into the changes to the structure of the Austro-Hungarian cavalry during the First World War. In the next chapter, the activity of cavalry corps and divisions in the Great War is discussed in detail, with regard to both strategy and tactics. In the case of regiments, the persons after whom the units were named are introduced briefly. The author presents all known versions of each badge – in images and in text alike. Reverses, maker’s marks, designer’s marks and methods of attachment are all discussed. To help orientation, each badge is pictured actual size, while certain important details are also featured enlarged. To provide additional information, period picture postcards and field postcards, as well as photographs portraying the wearing of the badges by soldiers are also included. A list of the most important badge manufacturers in Budapest and in Vienna can be found in the book, completed by partly colour images of catalogues and period documents regarding the ordering and shipping of badges to contemporary collectors.

“When reading Hungarian history one is bound every so often to come across the blue-pelissed, red-shakoed cavalrymen, who have become icons of courage. They are the hussars who earned their century-old, enduring good reputation and popularity by their moral worth and military merits which distinguished them from all other units. The notions of comradely solidarity, self-sacrifice and patriotism are inextricably intertwined with the Hussar which has become our national symbol – a real Hungarian speciality.

The badges depicted in the book bear interesting pieces of information, hold specific colour codes and they refer to historical and military persons, battlefield events and geographical locations. The badges belonging to the corps and troops are listed according to their place in the order of battle. Similarly to the abovementioned formerly published book, the present volume has a dual aim – the badges are represented as a catalogue, which may contribute to the cataloguing of the private and public collections of Hungary. On the other hand, images and references which can be found on the badges are also discussed in detail, so hopefully the book can provide fellow history-lovers with new data in a readable way.

General information referring to the unit in focus is given in the first few lines of each chapter which intend to help the readers identify the units. Such facts are the unit number and designation, the name of the colonel-in-chief, the year of formation, recruitment regions, geographical locations of the garrisons and headquarters, ethnic composition and subordination.

Each badge is described separately – all the motifs (image and inscription) found on both sides of the badges are discussed. These are followed by a technical description, namely the specification of material and measurements. In case it could be tracked, the designer and manufacturer of the badges are also listed. Additionally, where information was available the period prices of the badges are defined in korona and filler currency.

In retracing the purchase prices of the badges, period collector Ignácz Fekete’s correspondence and notes, the counting slips and bills he received from the badge manufacturers, and his badge register of more than 2000 pieces served as a guide. Ignácz Fekete, a Budapest-based lawyer, had been collecting First World War cap badges from 1916 to 1923, and had been exchanging a voluminous correspondence with badge producers, the Badge Department of the Imperial Coin and Medal Cabinet in Vienna (Kunsthistorische Sammlungen des A. H. Kaisershaus Münzen und Medaillensammlung) and other collectors. He maintained correspondence with a Viennese collector on a weekly/monthly basis, which shows the immensity of help they offered to each other regarding their collecting activity. It gives evidence of the frequency at which they informed each other on the newly released badges, and the fact that they also purchased and shipped items for and to each other.

Illustrations and badges were selected based on an extensive research conducted in the Budapest Military History Museum and several Hungarian and foreign private collections. Besides photos, various other illustrations enrich the volume. Examples for the use and wearing of the badges and further uses of the motifs represented on the badges are provided by period photographs, silver artefacts, field caps, field postcards and various weapons and equipment.

The conducted research was not only an exciting time travel but also led to the discovery of fascinating new relations and explanations. I dedicate my book to the gallant heroes of the war – to our grandfathers, great-grandfathers and great-great-grandfathers. We owe great respect to them for their sacrifices.”

There are no reviews yet.

Be the first to review “Attila Hermann: The Red Devils” Cancel reply 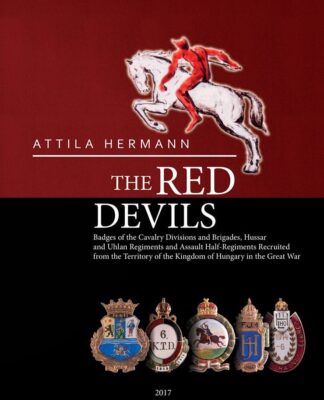 You're viewing: Attila Hermann: The Red Devils $40.00
Add to cart